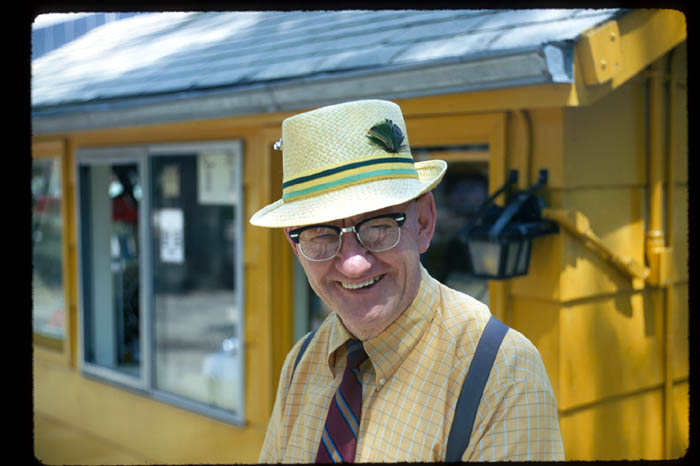 Clarence Mentgen originally owned a popcorn stand on the corner of Second Street and Main Street in Sterling until the local Jaycees organization built a tiny building on the Courthouse Square which became known by the community as "Clarence's Corner". Clarence faithfully popped popcorn six days a week and earned his living for more than 38 years in that location. Nobody knows why but his left side was paralyzed from an unknown cause since he was very young and he could not do things other guys could do. He finally closed up Clarence's Corner in 1977 due to State Health Department citings for lack of running water and sewer taps. He might have closed his doors anyway because the business was not meeting expenses. In 1990, the Courthouse Square underwent some modern landscaping. The popcorn stand was sold to the highest bidder and removed from the corner. A circular brick planter and a bronze plaque with the popcorn man was dedicated to Clarence on September 11, 1990. Clarence attended the ceremony where people once again ate popcorn on the corner.

In 2008 private and public fundraising resulted in the re-creation of one of our communities' most beloved memories - Clarence Mentgen's popcorn stand. A bronze statue sculpted by Shalah Perkins now stands in the circular planter. With this poem: "It's not how perfect a man is born, there are none without some fault. It's how we play the hand we\'re dealt that makes a man worth his salt. When he smiles and makes life pleasant he gives hope to his fellow man, Finds his way through the trials of life, makes the simplest grand. We don\'t know if he lived with pain, we don\'t know his fear, We only know what he showed the world, a smiling face that we hold dear."

Local contractor Gary Schlenz built and donated a replica of Clarence's popcorn stand which is also on the corner, although it could not be placed in the exact location due to local and state regulations.

*An organization hosting an event on the Courthouse Square does have the first rights to use Clarence's Corner as part of their own event if they so choose to do so.